It is a benign tumor that arises in the jaw near the molars. Ameloblastoma first arises in the enamel of teeth which form the protective layer over the teeth. It is a locally aggressive tumor but metastases to other sites rarely. 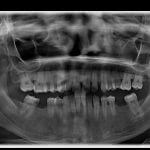 Most often it doesn’t produce any signs and symptoms except severe intense pain and swelling around the jaw area.

For diagnosis your doctor may recommend the following tests:

Treatment options for ameloblastoma include: