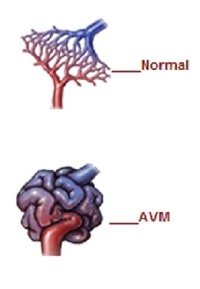 The exact causes of cavernous malformations is not known yet but mostly cases occur as a hereditary diseases and run in families. Sometime it can also occur after radiotherapy to treat brain tumor.

Recurrent episodes of bleeding causes blood loss and clot formation which causes ischemic injury of the brain and leads to the progressive neurological defect.

Your doctor after taking medical history and performing a physical examination recommended a following tests to check the extend of disease:

Treatment depend upon the severity of disease, treatment options include:

Medications. To reduce the signs and symptoms like anti epiletpic drugs to treat the seizures and anti depressant to treat the anxiety and depression.

Observation. If your signs and symptoms are mild then your neurologist only monitor the condition without giving any medications.

Surgery. To remove the malformation if your symptoms doesn’t cure with medicines