Emphysema is a lung condition characterized by problematic breathing. In this condition alveoli, air sacs of lungs, are damaged. This lead to weakening and rupture of alevoli creating larger spaces replacing small alveoli.

Long term exposure to airborne irritants is the main cause of emphysema which includes: 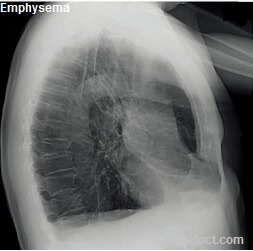 Emphysema can become complicated into:

Diagnosis of this condition depends upon detailed medical history and complete general physical examination of the patient. Other tests include the following:

Treatment options include the following: