A migraine is a type of head pain attacks that cause severe throbbing pain or a pulsing feeling. It happens usually on one side of the head. It is accompanied by nausea, vomiting, and extreme sensitivity to light and sound. Migraine attacks last for hours to days. The pain of migraine is so severe that it interferes with the daily routine.

Warning symptoms for some people is known as an aura. This occurs before or during the headache. An aura includes visual disturbances, like flashes of light or blind spots, or other disturbances like this. Medications help in preventing migraines and make them pain-free. 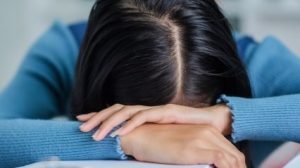 Migraines can begin at any age whether childhood, adolescence, or adulthood. It progresses through 4 stages: prodrome, aura, attack, and post-drome. Everyone who has migraines doesn’t need to go through all these stages.

1 or 2 days before a migraine start, the affected person might notice subtle changes that will warn of an upcoming migraine. Such changes include:

In some people, aura occurs before or during migraines. Auras are described as reversible symptoms of the nervous system. They are usually visible, but also include other disturbances. Each symptom of aura begins gradually, shows up over several minutes, and lasts for about 20 to 60 minutes.

A migraine attack lasts from 4 to 72 hours if left untreated. Migraines vary from person to person. Migraines attacks may happen rarely or strike several times in a month.

After a migraine attack, the affected person feels drained, confused, or washed out for about a day. Sudden head movements may also bring on the pain again for a short time.

Genetics and environmental factors play a role in causing migraines, though the actual cause is still unclear. Changes in the brainstem and its interconnections with the trigeminal nerve (a major pain pathway), may also be involved. Imbalance of brain chemicals like serotonin may also cause migraines.

Scientists are still studying the role of serotonin in migraines. Other neurotransmitters

also play a role in migraines.

Several things trigger migraines. These include:

The main goal of the treatment of migraine is stopping symptoms, reducing pain, and preventing future attacks. Many medications are specifically designed to treat migraines. Such medications are used to combat signs of migraines fall into 2 broad categories:

The treatment choices depend on the severity of headaches, whether the person has nausea or vomiting with the headaches, how painful these headaches are, and other medical conditions if you have.