The condition in which large painful ulcer formed on skin. Most common site of ulcers is legs. There are many conditions which is associated with this condition. They usually heal quickly with proper treatment.

Signs and symptoms of pyoderma gangrenosum include: 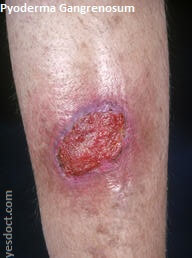 The main etiology factor of this condition is still unknown but it many researchers suggest that it may be associated with certain autoimmune conditions like ulcerative colitis, arthritis, and Crohn’s disease therefore it assumed that it is an inherited condition in which genetic factor play role.

After taking history your doctor might recommend the following tests: