It is usually a mild infection that affects children by age 2. It sometimes can affects adults. This is a commonest type of infection that most of the children have been infected by the time they enter kindergarten. Roseola is caused by two common strains of herpes virus.

Symptoms of roseola appears usually after a week or two after getting infection. But this condition can also be asymptomatic. Patient with roseola presents with: 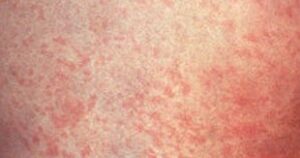 Usually the commonest cause of this infection is human herpes virus 6, but it can also be caused by human herpes virus 7. Roseola is transmitted from person to another person through infected saliva or secretions. Roseola, even in the absence of rashes is a highly contagious disease. Unlike other viral illnesses that have relatively rapid spread, roseola rarely results in an outbreak.

Usually complications are rare with roseola but it can become complicated in low immunity people such as:

Diagnosis depends upon detailed medical history and complete general physical examination of the patient. Along with this examination for rashes is very crucial as telltale rash is present in roseola patient. Antibodies to roseola can also be detected in blood test.

Usually roseola is a self-limiting infection. Over-the-counter medications for fever such as acetaminophen (Tylenol, others) or ibuprofen (Advil, Motrin, others) can be prescribed. Aspirin should be used with caution as it is linked to a life-threatening condition in children, Reye’s syndrome. Antibiotics are not given. Antiviral drugs such as acyclovir can be prescribed in patients with low immunity.